This land feature is located in NSW Australia. I am not giving out the exact location to prevent possible damage to the area. 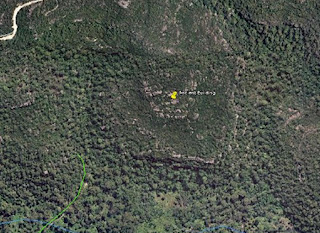 The square outcrop in the centre caught my eye first then the circular 'dome' like bulge on top.  It looks like an unnatural 'man made' structure and would obviously be quite ancient based on its placement in the surrounding landscape.  To the left is another square structure orientated along a different axis.

Compare the images below with the above in case you did not see the land geometry. 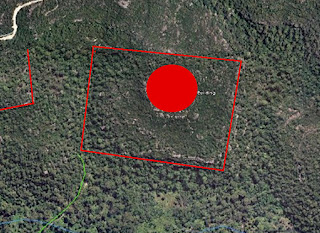 Look at the blue lines and then the top image and you will see the step like structure in the underbrush. 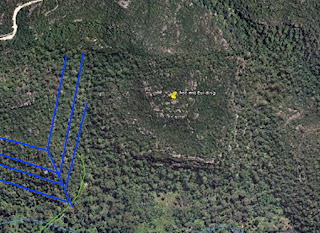 Below you can see the close up of the edge of the front section. 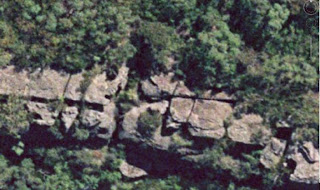 I decided to inspect it on foot...

Access was made from via a trail (the green line) which seemed to lead straight to the front left corner of the square and then the path leads off to the right and we followed that up hill through more thick forest and rocks.  Then it got steep and really strenuous.  This 'structure' turned out to be about 60 metres high and the last 40 metres are via rocky paths of about 45-60 degree inclines. Note that this is the main structure (big red block) which we climbed. I did not examine the other land features and can't state whether the blue steps seem artificial or not on closer inspection.

Below you see me at the top of one of these steep sections against  the cliff face, about to climb up onto the rock in front of me to do yet another steep section. 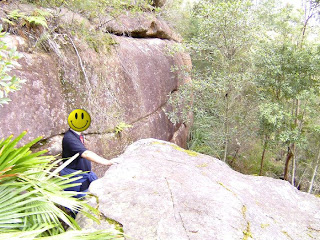 Behind me you see the wall and if you look carefully you can see horizontal 'joints' and behind my head a vertical 'joint'.  Below is another picture of this 'joint' work that better illustrates my argument that is an artificial structure. 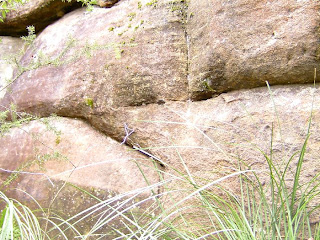 For comparison, take a look at the Inca stone wall below.  Its similar but clearly the Inca wall is young and in good condition compared to the wall I'm standing in front of. 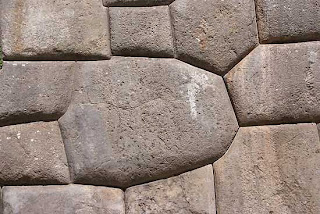 Well we made it to the top after stopping several times for a brief rest and we still had to get back down again on our tired and rubbery legs.  My original plan was to explore the top and see what the 'dome' looked like from up close but forget it.  It's thick jungle up there between the rock and the paths are steep and you can't see much because of all the dense bush. I did manage to walk on the front edge and that just convinced me even more that this is an artificial structure because I found what looks like ancient cement joining two giant blocks of stone.  There was currently a gap of about a foot between the two rocks but this ancient morter was still stuck to the side of the one rock.  Sorry no picture, I had left the camera with my wife and was not going to climb back down to where she was and then climb back up just to take a picture.


Some parts are so bad you have to walk bent over because the path consists of a bush-tunnel and all you can see is the path and dense green bush. 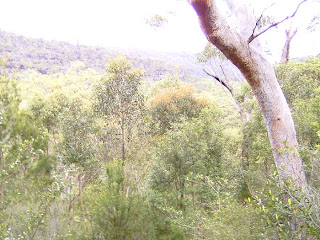